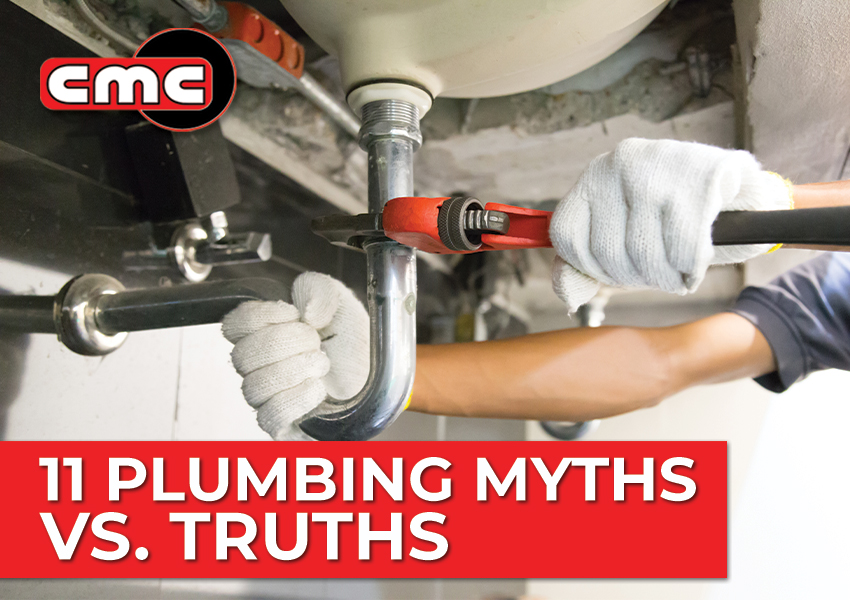 From clogged drains to leaky faucets, plumbing problems can be a source of major headaches. Unfortunately, many people don’t know much about plumbing and often fall victim to common misconceptions and myths. To help you, we’ll bust some of the most common myths about plumbing and reveal the truth. Understanding the facts about plumbing can help you avoid costly repair jobs and preserve the integrity of your home’s plumbing system. So, if you’re looking to separate plumbing fact from fiction, you’ve come to the right place! Let’s get started.

Most Plumbing Problems Are Do-It-Yourself Projects

Don’t fall for this false narrative. Most non-trivial plumbing projects require a plumber, given their specialized expertise. While cleaning the pipes or repairing a leaking faucet may not always require the assistance of a professional, anything more complicated does call for at least somewhat professional advice, if not professional skills.

Rethink that! Hard water can yield scale build-up, which can harm your appliances. It indicates that you will, at the very least, have to deal with deposits on items like fixtures, dishes, and clothing. The best thing is to invest in a water softener to remove the hard water minerals in the water in your home. Not to mention, you’ll get a far better shower every day!

Drains Flow in Opposite Direction South of the Equator

Many believe that all drains move counterclockwise south of the equator and clockwise north of the equator. But how your drain moves depends on how it was built and the amount of fluid going through it, rather than where it is positioned in the earth. The way drains are normally built in some countries, like Australia, causes them to flow counterclockwise. However, this is a matter of convention and not geography.

It’s simple enough to get liquid drain cleaner from the hardware store when you want to unclog a pipe. However, this frequently has the opposite effect. The solution contains hazardous and corrosive chemicals that might harm your pipes and eat away at the clog. To avoid causing additional plumbing issues, rely on a competent professional to remove the clog.

A Faucet Leak Is Not a Call-To-Action

FALSE! When you have drops that won’t stop, you are wasting water, increasing your water bill, and damaging your plumbing and faucet fixtures. If you can’t take care of a leak, get a technician quickly!

Orange Rinds or Lemons Help to Clean Your Garbage Disposal

Boiling Water Can Remove a Clog

This one is based on some reasonable logic, but it is a misconception. A blockage cannot be removed by boiling water. Many people think that the hot water will dissolve the gunk in the same way as it dissolves adhesive residue, but all it does is transform it into a soggy mess. You’re best off using cold water since it can coagulate the solids and enable the running water to carry them down the pipe. It only sometimes works even still. Because it can result in many problems, most codes prohibit the entry of water hotter than 140° F into the drain system. Hot water can bend and destroy PVC pipes and even melt the wax ring in your toilet.

You Can Ignore a Small Leak

Wrong! Even a small trickle can have negative effects. The Environmental Protection Agency (EPA) estimates that household leaks waste over 1 trillion gallons of water yearly. Your water cost will go up if your faucet is leaking, and it can even cause bigger issues. Mold and mildew can grow under a sink due to a small leak. Continuous dampness can cause the supporting framework and cabinetry to deteriorate. Most times, repairing a leaky faucet is simple and inexpensive.

You should not flush cat waste into the toilet. It might have contaminants and substances that are detrimental to the environment, your septic and plumbing system, and your health.

You Can Flush ‘Flushable’ Wipes

One of the primary causes of clogged drains is those “flushable” baby wipes. They do not break down in the same manner as toilet paper. So, don’t flush them.

Plumbing issues can quickly become expensive and difficult to fix, so it’s important to address them as soon as possible. And worst of all, don’t do it yourself-you might make the problem worse. A qualified plumber can quickly diagnose and fix the problem, saving you time and money. So, don’t hesitate to call or visit us at our office today!

We use cookies on our website to give you the most relevant experience by remembering your preferences and repeat visits. By clicking “Accept”, you consent to the use of ALL the cookies.
Cookie settingsACCEPT
Manage consent

This website uses cookies to improve your experience while you navigate through the website. Out of these, the cookies that are categorized as necessary are stored on your browser as they are essential for the working of basic functionalities of the website. We also use third-party cookies that help us analyze and understand how you use this website. These cookies will be stored in your browser only with your consent. You also have the option to opt-out of these cookies. But opting out of some of these cookies may affect your browsing experience.
Necessary Always Enabled
Necessary cookies are absolutely essential for the website to function properly. This category only includes cookies that ensures basic functionalities and security features of the website. These cookies do not store any personal information.
Non-necessary
Any cookies that may not be particularly necessary for the website to function and is used specifically to collect user personal data via analytics, ads, other embedded contents are termed as non-necessary cookies. It is mandatory to procure user consent prior to running these cookies on your website.
SAVE & ACCEPT